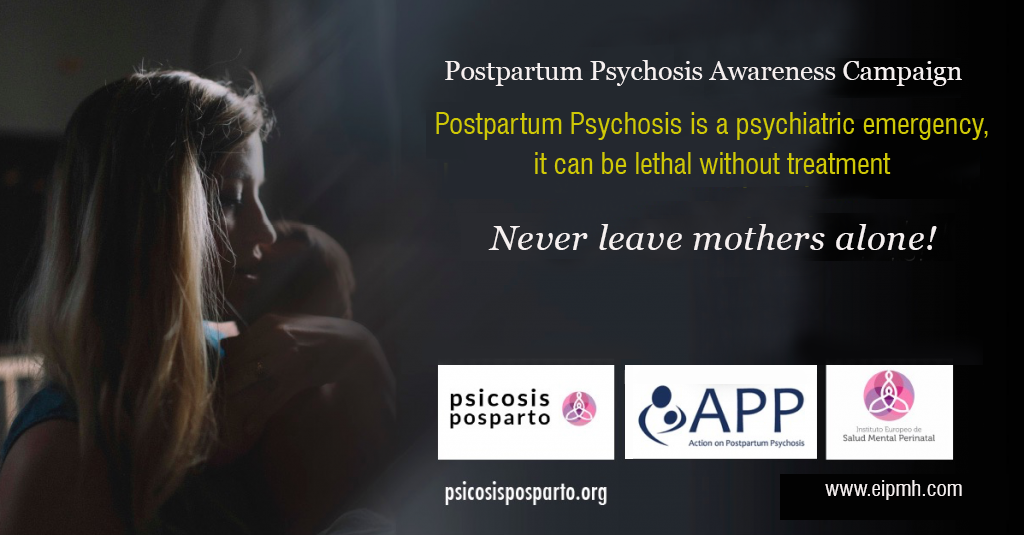 [Photo by Jenna Norman on Unsplash]

With the collaboration of the British association Action on Postpartum Psychosis and on the occasion of World Maternal Mental Health Day 2019, the European Institute of Perinatal Mental Health launches a campaign to raise awareness, inform and promote the improvement in health care for women who suffer from postpartum psychosis and their babies.

Postpartum psychosis (PP) is a severe, but treatable, form of mental illness that affects, according to estimations, 1 or 2 mothers per thousand births. Women with a history of prior mental disorders have a higher risk of suffering from it, as do mothers with a family history of bipolar disorder and those who have already experienced episodes in other postpartum periods, but it may also appear in women with no history of mental illness.

Postpartum psychosis can start hours, days or weeks after childbirth, but can also show up passed several months. Its beginning is usually abrupt; with symptoms of mental confusion that develop into psychosis. First the woman feels excessively changeable in mood: depression, irritability o, sometimes euphoria and feeling very energetic. After these, paranoid, megalomaniacal or other delusions come into play. The delirious mother lives in an anguished unreality: she may think that her baby is demon-possessed, or that the police want to take it away from her, or she feels that the baby is sent from God … She can hear voices that give her indications about what she has to do or about how to save your baby.

The risk of maternal suicide and/ or infanticide is very high in these circumstances.

Postpartum or puerperal psychosis is a psychiatric emergency situation and a disorder that all professionals who attend recent mothers should know how to recognize and treat, to prevent the dramatic consequences associated with an undetected and untreated postpartum psychosis.

As soon as a mother begins to show confusion, serious insomnia or delusions (strange beliefs that could not be true), there are two indications to follow: do not leave her alone at any moment and make sure she receives urgent medical and psychiatric attention. With the right treatment, women with postpartum psychosis can make a full recovery in a few weeks.

The European Institute of Perinatal Mental Health launched this awareness campaign on postpartum psychosis, coinciding with the celebration of World Day of Maternal Mental Health, because of the dramatic consequences associated with undetected and untreated postpartum psychosis. There is a great ignorance about what postpartum psychosis is, what its symptoms are, how it appears, the suffering envolved, or how it can be overcome with adequate support. We think that it is crucial for families to know when to ask for help and that all of society, and especially the professionals attending mothers who have recently given birth, are aware of puerperal psychosis.

It is essential that affected mothers receive a correct and evidence-based treatment, which includes their baby and, if necessary, the father: Ideally, the treatment should be carried out in specialized psychiatric inpatient Mother-Baby Units (MBUs). MBUs are designed to admit and keep mothers and their babies together and therefore minimize the impact ot the illness, supporting the baby while the mother receives treatment. With this campaign we also aim to make visible the lack of these specialized resources in our country for the attention of perinatal mental disorders and promote their creation.

United Kingdom is the European country of reference in this field. Several dramatic cases and the the broadcasting of many testimonies have led to reaction and the creation of numerous perinatal mental health services and devices for the protection of mothers and their babies.

In this sense, the media also plays a fundamental role. It is worth remembering the recent case of a mother in Godella (Valencia, Spain), who killed her two children of five months and three and a half years in the middle of a psychotic outbreak. Mothers who suffer postpartum psychosis are neither bad mothers nor psychopaths, they are women who suffer from a disease that can be fully cured with treatment and can still continue to take perfect care of their children.

The aim of this awareness campaign, adressed to mothers, their partners and families, as well as health professionals working with women and families in pregnancy and the perinatal period, is to inform about this psychiatric illness and of the importance of its prevention.