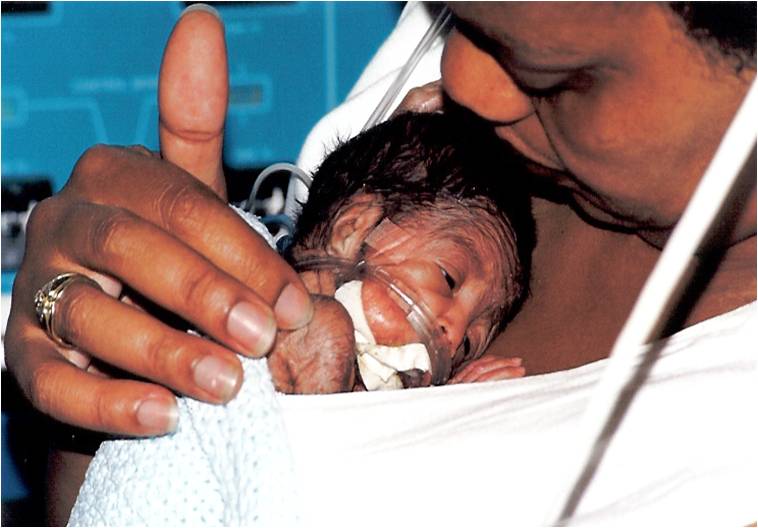 Studies have shown that adolescents and adults who were born prematurely have poorer social abilities. However, there were no studies that relate these results to the type of care they received while in the neonatal intensive care unit.

The study we want to share shows, once more, the importance of skin to skin contact, as it helps brain maturation in infants, sustains the mother-infant bond and helps prevent the long term psychosocial repercussions of being isolated in an incubator.

Newborns experiment the world mainly through touch. Researchers have now measured the brain signals from 125 babies (some born prematurely and others full-term), showing that early contact experiences have long lasting effects in the way the brain responds to gentle touch, measured once babies are discharged.

The findings, published in Current Biology, are one more reminder that gentle touch is highly important for normal development of children. This is particularly important for the 15 million babies born prematurely each year, who often spend long periods of time in neonatal intensive care units (NICUs)

Making sure that premature babies receive positive contact and support, like skin to skin contact with their parents, is essential to help their brains react to gentle touch in the same way that term babies´ brains can, says Nathalie Maitre from the Nationwide Children’s Hospital and Vanderbilt University Medical Center. When parents cannot do so, hospitals should consider other providers to give a carefully planned tactile experience to premature infants, which is often lacking in hospital settings.

Maitre and her colleagues studied 125 babies, some of them born preterm (24 to 36 weeks of gestation) and others full term (38 to 42 weeks). Before hospital discharge, researchers measured the babies´ response to touch with a soft encephalogram.

These measurements showed that premature babies were more likely than term babies to have a reduced brain response to gentle touch. Later analysis showed that response to touch were less reduced in preterm infants who had spent more time in skin to skin contact with their parents, or providers, in the NICU.

On the other hand, the more painful medical procedures infants went through, the less their brains were able to respond to gentle touch later on. This held true even when babies were given analgesics or glucose to help them during the painful procedures.

“We certainly expected to see that positive tactile experiences during hospital stay would help babies have a more normal response when they went home”, Maitre says, “but we were surprised to discover that painful procedures at the beginning of life may affect their capacity to feel gentle touch later.” With these new findings, Maitre and her colleagues are now designing new ways to procure positive contact for babies in NICUs. They are also researching how a baby´s brain response to touch interacts with his brain´s response to a person´s voice.

New parents, including those whose infants need to undergo painful procedures, take heart: close, frequent, gentle contact with your baby is more important than you think.