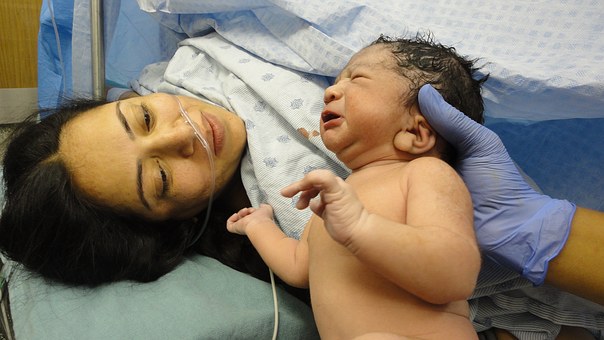 A recent study from the University of Louisiana (summarized below) has discovered that some mothers with postpartum depression have an “altered expression of oxytocin receptors”. Oxytocin is the hormone of love, human connection and wellbeing; it is produced at high levels during birth and breastfeeding and it is intimately involved in the mother-infant bond, as well as in mothering behavior – among other things. According to the study, their discovery opens the door to potential new pharmacological treatments for postpartum depression, centered on oxytocin receptors.

This conclusion gives the impression that some women naturally have poor oxytocin receptors, and will soon be treated to solve that “pathology”. However, if we broaden our view to include causes, what we discover is that this study did not take into account the possible factors that might have previously altered the mother´s oxytocin receptors. Specifically, we are referring to how synthetic oxytocin administered to the mother during birth – which is systematically done during conventional deliveries – causes the body to react by desensitizing its oxytocin receptors (Kerstin Uvnäs Moberg).

It is understandable that scientific studies be centered on a particular aspect of reality so as to obtain results, but results out of context may reach inadequate conclusions. It is not that they are mistaken, it is merely that they are only a piece of the puzzle. When the cause for the effects – why are the oxytocin receptor low? – is not taken into account, we run the risk of unnecessary medicalization and pathologization of maternal mental health. Why have to give medication to mothers with low levels of oxytocin, if we can prevent those levels from becoming low in the first place? One of the main roles of health care professionals who work with birthing mothers and newborn infants is to protect the high levels of oxytocin that naturaly occur perinataly, when the circusmtances are right – by enabling and supporting those “right” circumstances:

These are some of the known effects of the medicalization of birth on the endogenous oxytocin system:

Stimulating birth with synthetic oxytocin elevates the risk of postpartum depression and anxiety disorders during the year after birth.  https://www.ncbi.nlm.nih.gov/pubmed/28133901

The use of synthetic oxytocin impacts on mothering behavior, mother-infant bond and breastfeeding. Beyond labor: The Role of Natural and Synthetic Oxytocin in the Transition to Motherhood Journal of Midwifery and Women’s Health

Epidural impacts on mothering behavior and the mother-infant bond. https://www.mamamia.com.au/epidural-affect-hormones/

Oxytocin is widely referred to as the love hormone and plays an important role in the regulation of social and maternal behavior. In recent years, the oxytocin system in the brain has received tremendous attention as key to new treatments for many mental health disorders, such as anxiety, autism spectrum disorders and postpartum depression. New research at LSU have discovered a group of cells that are activated by oxytocin in one area of female mouse brains that are not present in the same area in male mouse brains.

“Many researchers have attempted to investigate the difference between the oxytocin system in females versus males, but no one has successfully found conclusive evidence until now. Our discovery was a big surprise,” said Ryoichi Teruyama, LSU Department of Biological Sciences associate professor, who led this study published in PLOS ONE. The oxytocin receptor cells are present in the brain area thought to be involved in the regulation of maternal behavior.

Moreover, the expression of oxytocin receptors in these cells are only present when estrogen is also present. These imply that these cells are involved in inducing maternal behavior. In addition, it confirms what many recent human studies have shown: there is a connection between an altered expression of oxytocin receptors and postpartum depression.

“I think our discovery could be universal to all mammals that exhibit maternal behavior, including humans,” Teruyama said.