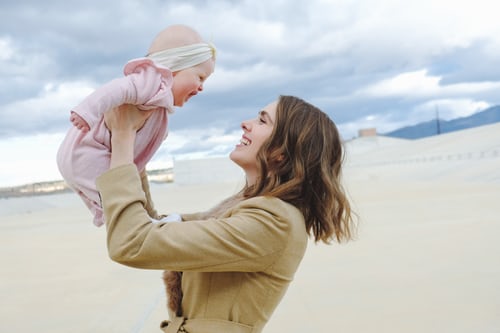 Brains of mothers and their babies synchronize more easily when mother is happy, according to a new study from Cambridge University. Researchers discovered that the brains of a mother and her infant form a megaweb where brainwaves align, which permits better connection and empathy.  But the level of connectivity is dependent on mother´s emotional state. When mothers are feeling more positive emotions, the brain-to-brain connection is stronger.

The research, published in the journal NeuroImage, used a method called dual electroencephalogram to observe mothers and their babies as they interacted. They discovered that mother and baby brain waves tend to synchronize, an effect known as interpersonal neural connectivity, particularly in the 6-9 Hertz frequency, the alpha infant range.

Observing the quality and structure of interpersonal neural connectivity using a mathematical network analysis method, researchers describe how information flows in the brains separately, and also how both brains acted together as a network.

Mothers and their babies spend a lot of time together, in a positive emotional environment (their love for each other), in which their brains are highly connected. The study found that positive interaction, with abundant visual contact, improves maternal and infant brain capacity to act as a single system, creating an efficient information flow and exchange between mother and child

“From our previous research we know that when neural connections between mothers and babies are strong, babies are more receptive and more prepared to learn from their mothers,” said Dr. Vicky Leong, director of the study, from the Psychology Department at Cambridge University. In this moment of development, the infant brain has the capacity to change significantly, and these changes are supported by baby´s experiences. Using a positive emotional environment and visual contact, parents can better connect with their infants, and this stimulates their development and mental capacity.

Results also suggest that infants of mothers with depression may show lower learning abilities due to a weaker neural connection with their mother.  Mothers who are going through a persistent negative mental state due to ongoing clinical depression tend to interact less with their babies. They often talk in a more monotone way, offer much less visual contact and it they tend to respond less often when their babies try to get their attention.

Our emotions literally change the way in which our brains exchange information with others; positive emotions help us to communicate in a much more efficient way,” said Dr Leong. “Depression may have a powerful negative effect in a parent´s capacity to connect with her creature. All the social signals that normally favor connection are less available to the infant, so he does not receive the optimal emotional support necessary to prosper.”

Emotional communication between parents and babies is crucial during the first years of life, but we know little about the neural basis for it. This is the first study relating brain waves from two related people to investigate if interpersonal neural connectivity of infants to their mothers may be affected by the emotional quality of their social interaction, and in what way.

The healthcare community must have the tools to recognize, diagnose and manage depression in mothers, including of course postpartum depression, not only to support the mother´s emotional and mental wellbeing but also to protect her infant´s development. Protecting the dyad and that crucial emotional exchange between them must be a priority for anyone working with families.

Being a social species, humans share their emotional states with others. This research shows how emotions change the connection between two individuals at a neural level. This might also be shown to occur in other close relationships, as in couples, close friends, siblings… It is probable that the effect may be augmented by how well they know each other and how high the level of trust is.