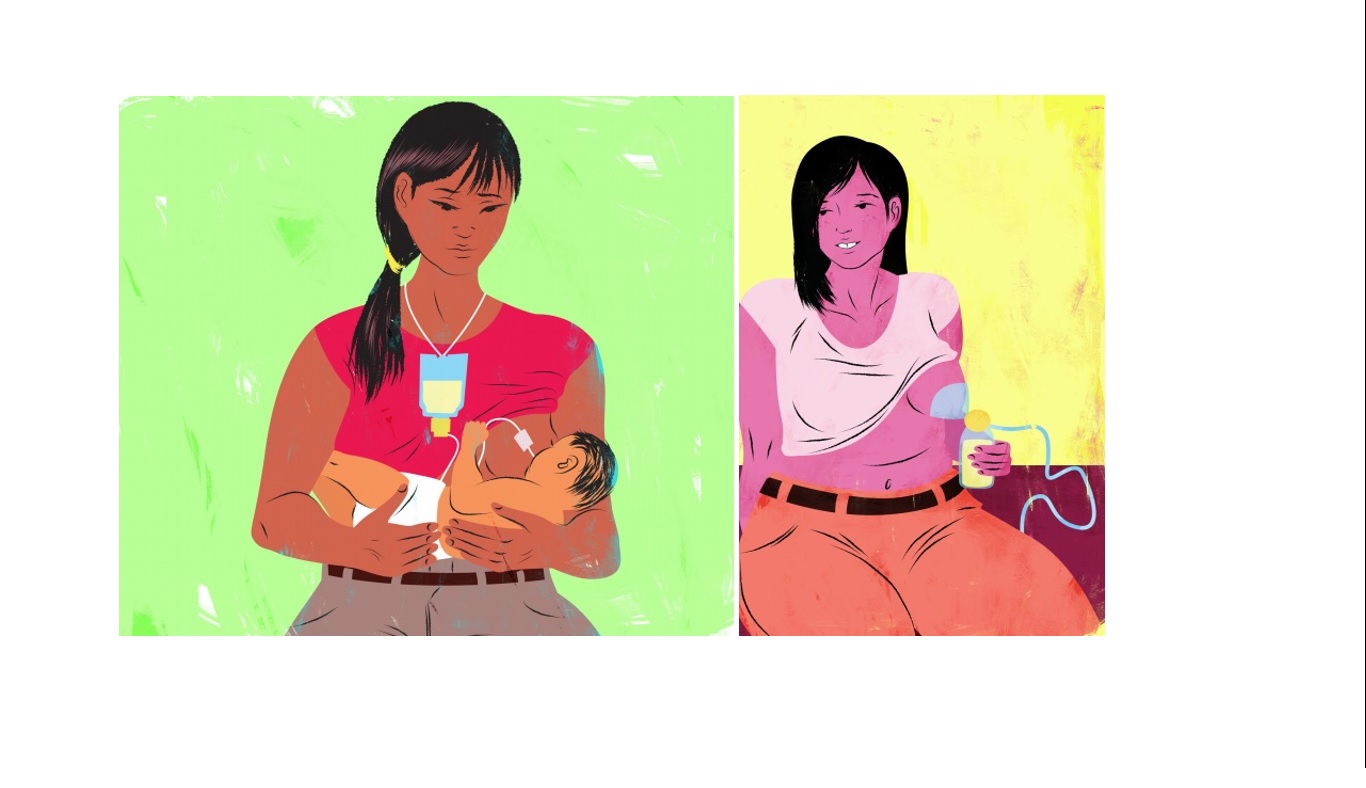 Some dyads (mother-infant pair) start their breastfeeding relationship in harsh circumstances. Frequently, due to medicalized births and unfavorable hospital routines, there are so many interferences to initiate breastfeeding that by the time mother and baby arrive home they are already using bottles and formula – despite mother having desired to exclusively breastfeed.

These mothers often feel that they do not make enough milk and that their babies prefer the bottle. They will make comments like “my baby doesn´t like my breast”, “I cannot make enough milk”, “the more bottles I give my baby, the less she likes me”, and so on. This can become the road into postpartum depression.

Those mothers who are intent on breastfeeding will often look for support, and may find it in a midwife, a lactation consultant or a breastfeeding support group. These health care professionals or counsellors may offer the mother to work on her milk production by expressing milk from her breasts (either with her hands or with a pump) and feeding that milk to the baby, as well as putting baby on the breast.

And this is what we call triple breastfeeding.

Imagine: mother puts baby at her breast. Baby suckles for an hour and a half, falling asleep frequently. Mother will tickle him, speak to him, encourage, often to little avail. After an hour and a half, mother will unlatch the baby (he never seems to come off on his own), put him in the crib, set up her breast pump and begin pumping, going for at least 15 minutes on each breast. Halfway through, the baby wakes up and cries – he´s hungry. But he was just on the breast for almost two hours! Mother turns off the pump (and so little milk has come out!) and feeds her baby a bottle of formula. She cries. She feels exhausted, useless, and unable to meet her baby´s needs. She has not left the house for days, because she is immersed in a never-ending cycle of breast-pumping-feeding.

When healthcare professionals who work with breastfeeding mothers suggest that mothers do triple breastfeeding (breast-pump-feed), they often do not take into account the emotional drain on the mother – nor on the infant.

What mother´s mammalian brain and body expected was to put her baby at the breast immediately after birth, help her newborn attach and feed and then sleep on her body – and this on and on for a few weeks. This would have assured a wonderful milk supply and an effective little breastfeeder. Instead, there was a medicated birth which dampened her own oxytocin, she was separated from her newborn because of inadequate hospital policies, no one explained or protected the importance of that first feed right after birth, but someone made sure to tell her that her colostrum was not enough and her baby needed “a little help” from formula in a bottle.

What baby´s mammalian brain and body expected was a normal birth and to be laid on her mother´s chest immediately after birth. Her instincts would have had her latched on and suckling within the first hour after birth, and feeding effectively and frequently after that, safely sleeping on or very near her mother in between feeds. Instead, she was taken from her mother, hurt (by injections, sticky cream in her eyes, harsh lights, cold scales, strangers, fear and loneliness) and then fed. The feeding method was not what she expected (it was a cold silicone teat and a strange-tasting liquid and it flowed so fast she nearly choked) but, hey, it was food. Food is good for survival, even more so if the world is going to be as bleak as it has seemed these first hours.

So, possibly, this baby´s first “good” experience is the bottle.

All these interferences now have laid the stage for drama: a mother whose breast has not been stimulated those crucial first days and therefore might make less milk than necessary, and a baby whose positive feeding experience is at the bottle – yes, the breast is nice, I like to fall asleep on it, but the food to survive comes from another place.

We must take this emotional cocktail into account to give this dyad breastfeeding support. Counselling the mother to pump more frequently is laying a weight on her shoulders for, how will she find the time? Her baby is so demanding!  Counselling the mother to put the baby at the breast more often or for longer periods of time is not useful if baby´s not suckling effectively – and it often drives the mother to despair to see her baby wailing in hunger after a two hour nursing session, as if baby was just waiting for the bottle – which he probably was. In his survival-driven brain, it is where food comes from. How important that mother may understand her baby, understand that he is not disliking her breast or rejecting her, he is merely trying to survive to the best of his abilities. Such an intelligent baby!

Sometimes mother will be counselled to put the baby at the breast even if baby despairs with hunger, saying that if he is hungry enough, he will eat. Sadly, this is not the case. A desperate baby who is used to bottlefeeding may not have the emotional or physical ability to breastfeed simply because he is desperate. If we insist on this strategy, mother´s breast becomes a place of suffering, of battle and hunger.

To help this dyad, we have to get the oxytocin flowing. Give their mammalian brains and bodies what they expect. To be close together in a physical relationship where abundant feeding happens. Baby must feel safe and fed in mother´s arms. No battles at the breast, no fighting, just enjoyment. That is the aim. If in between feeds the baby wants to just nibble at the breast for comfort and to sleep, that is also wonderful!

So, each time the baby shows hunger cues, feed her. If it is with a bottle, do it like it was the breast. Afterwards, mother may wish to express some milk from her breast to help her supply. If she is calm, having been relaxed with her baby and knowing he is well fed, more milk will flow. An even better option is to use an at-breast tube feeding system (this is a milk container with a thin tube that mother lays on her nipple, so that when the baby suckles he gets milk both from the breast and from the container). With this system, babies do a strong suck and help rise mother´s milk production, so often there is no need for the mother to pump.

The point is for mother and baby to enjoy feeding time, and for baby to re-learn that mother is the place where there is warmth, protection and food. Once they are both enjoying this time, taking further steps towards reaching the goal of exclusive breastfeeding will be much easier.